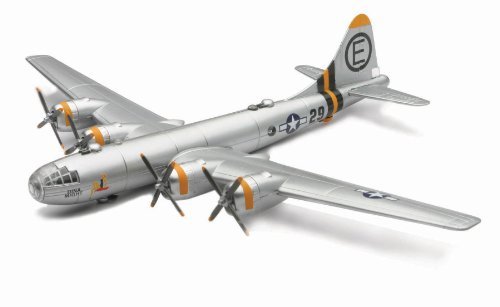 The Boeing B-29 Superfortress is a four-engine propeller-driven heavy bomber designed by Boeing which was flown primarily by the United States during World War II and the Korean War. It was one of the largest aircraft operational during World War II and featured state of the art technology. It was the single most expensive weapons project undertaken by the United States in World War II, exceeding the cost of the Manhattan Project by between 1 and 1.7 billion dollars. Innovations introduced included a pressurized cabin, dual-wheeled, tricycle landing gear, and a remote, computer-controlled fire-control system that directed four machine gun turrets that could be operated by a single gunner and a fire-control officer. A manned tail gun installation was semi-remote. The name “Superfortress” continued the pattern Boeing started with its well-known predecessor, the B-17 Flying Fortress. Designed for the high-altitude strategic bomber role, the B-29 also excelled in low-altitude nighttime incendiary bombing missions. One of the B-29’s final roles during World War II was carrying out the atomic bomb attacks on Hiroshima and Nagasaki.Highly Detailed Easy-Build Pre-Painted plastic model kit
Part of the Sky Pilot Classic Bombers Collection
Great for any airplane enthusist or burgeoning model builder of any age
Approximately 9-9.5″ long depending on model
Check out our other available kits!